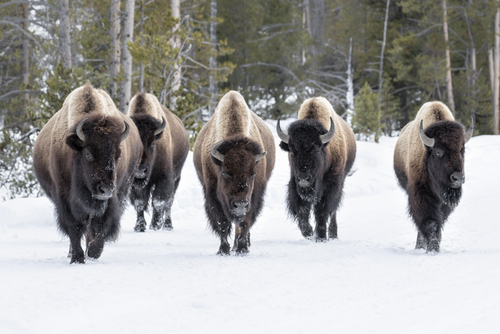 National Bison Legacy Act (H.R. 2908) – Sponsored by Rep. Lacy Clay Jr. (D-MO), this bipartisan bill was easily passed by both the House and Senate and was signed into law on May 9. It authorizes the North American bison as the national mammal of the United States, now joining the bald eagle as America’s symbolic animal; the oak as the national tree; and the rose as the national floral emblem.

Transnational Drug Trafficking Act of 2015 (S. 32) – This bill was co-authored by Sen. Dianne Feinstein (D-CA) and Sen. Chuck Grassley (R-IA). The act permits the Justice Department to prosecute foreign drug traffickers, including chemical producers from other countries who illegally ship precursor chemicals (for example: cold medicines to be turned into meth) into the United States, knowing these chemicals will be used to make illegal drugs. The bill was signed into law by the president on May 16.

Preventing IRS Abuse and Protecting Free Speech Act (H.R. 5053) – Under current law, tax-exempt groups and organizations don’t have to reveal their donors to the public, but they do have to report to the Internal Revenue Service the names of any donors who contribute more than $5,000 each year. This new bill would no longer require 501(c) charities to identify contributors in annual tax returns. The law is specifically intended to shield large donations to organizations that contribute to political campaigns. Historically, 501(c) organizations were not large contributors to election campaigns. However, these organizations – which include PACs – spent more than $300 million in the 2012 election year. In late April the bill, which is sponsored by Rep. Peter Roskam (R-IL), moved from a congressional committee to the House/Senate for consideration.

Used Car Safety Recall Repair Act (S. 900) – Following April’s largest safety recall in American history (Takata air bags installed in 34 million vehicles), this bill would mandate that used cars with recalled parts cannot be resold until they are repaired – the same requirement that currently applies to new cars. It is estimated that 23 percent of cars with recalled parts do not get fixed, in part because they are sold on the used market. The bill was sponsored by Sen. Richard Blumenthal (D-CT) in April and has been assigned to a congressional committee for consideration.

Democracy Restoration Act of 2015 (H.R. 1459) – If enacted, this bill would permit 4.4 million ex-felons who have served their time to vote in federal elections, a right many are presently barred from doing. Presently, each state sets its own rules for voting eligibility. For example, Vermont and Maine allow current incarcerated prisoners to vote, while Florida, Kentucky and Iowa ban those with felony convictions from voting for life. The bill, sponsored by Rep. John Conyers Jr. (R-MI), was assigned to a congressional committee in March, which will consider it before possibly sending it on to the House or Senate as a whole.